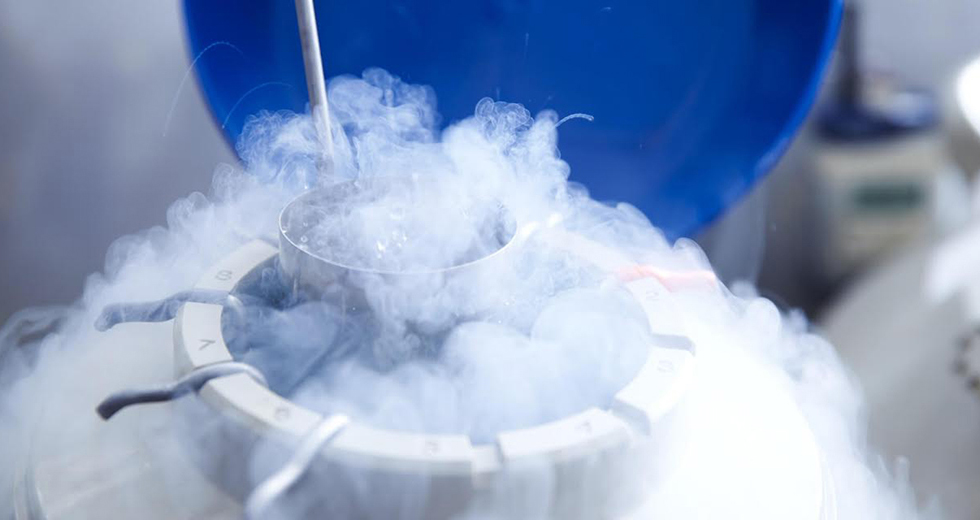 The remaining embryos can be preserved in the lab, via a method known as cryopreservation, so as to remain available for future use if that is deemed desired. This way it is possible to increase the percentage of impregnations with only one treatment cycle, due to the possibility of consecutive embryo transfers in future natural cycles with lesser financial and emotional burden as well as pharmaceutical intervention. In addition to the above, in the case of pregnancy and birth, the preserved embryos from the first cycle can be used for future transfers, to allow the couple to have more children.

At the Mediterranean Fertility Institute we apply the method of vitrification for the freezing of embryos at all stages, as well as for the freezing of eggs or sperm. This particular method allows for higher rates of survival. Frozen embryos and eggs are kept in tanks of liquid nitrogen at a temperature of -1960C, where they can remain unaltered for a long period of time. Today’s technology can grantee, an average of 90% - 95% survival for the embryos after thaw. The rate of success and impregnation after the transfer of embryos that have survived the thawing process is approximately the same as the rate of success after the transfer of fresh embryos (ones that have not been frozen).

WHOM IS THIS PROCEDURE DIRECTED TO?

This procedure is extremely important for women looking to maintain their fertility by freezing their eggs. This category can include women that are set on concentrating on their carriers, suffer from an early menopause but are not ready yet to have children or women about to undergo a serious treatment, such as chemotherapy.

Cryopreservation can also be a procedure to help men maintain their fertility through freezing of their sperm. The method is suited for men about to undergo a testicular surgical procedure, men before cancer treatment or for any case that affects the quality of the sperm reversibly or permanently.

It is also suggested that men with a low count of spermatozoa and a declining rate of concentration and mobility, should prosed in freezing their sperm, so as to secure future efforts towards having children. In cases of azoospermia where the sperm is collected from the epididymis or directly from the testicle, there is a possibility of freezing sperm or testicular tissue given that the number of spermatozoa allows it.